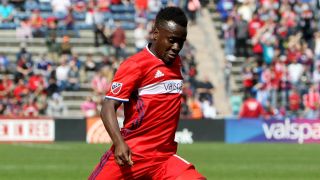 Chicago Fire extended their winning streak after holding off FC Dallas 2-1 in MLS on Thursday.

The league's top goalscorer Nemanja Nikolic and David Accam scored in the opening nine minutes as the Fire made it four successive victories.

The Fire made a dream start in front of their fans at Toyota Park when Nikolic opened the scoring in the third minute.

Nikolic side-footed Brandon Vincent's cross beyond Dallas goalkeeper Chris Seitz – taking his tally to five goals in four games and 11 for the season.

Dallas, however, hit back within three minutes thanks to Roland Lamah as Cristian Colman brought up the 1,000th assist in the club's history.

The stunning start to the match continued when Accam restored Chicago's lead in the ninth minute – curling the ball past Seitz.

Nikolic had the chance to make it 3-1 in the 93rd minute after Victor Ulloa conceded a penalty but he was denied by Seitz.

The Fire are second in the Eastern Conference – two points adrift of Toronto FC – while Dallas are third in the west.