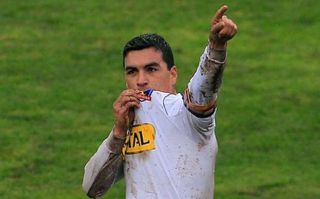 Hosts Colo Colo desperately needed a win in the top-of-the-table clash on Sunday, and they delivered thanks to goals from Esteban Paredes and Jean Beausejour.

The visitors had Jose Rojas and Osvaldo Gonzalez sent off in the second half as their lead at the top was cut to two points after 11 games.

Paredes, the danger man heading into the clash, was given too much space as he opened the scoring in the 51st minute.

The forward flicked in his 10th goal of the campaign after a well-timed run.

Making matters worse for Universidad Chile, Rojas saw red after landing a bump on Felipe Flores to pick up his second yellow card.

Beausejour doubled the lead in the 78th minute, getting on the end of a Juan Delgado pass before a delightful piece of skill saw him round goalkeeper Johnny Herrera to score.

Gonzalez was sent off three minutes later for a swinging arm as Colo Colo saw out a convincing and important win.

Sitting third on 25 points - one behind Colo Colo - are Santiago Wanderers, who edged Palestino 1-0 thanks to a Jorge Luna penalty.

Barnechea overcame Universidad Catolica 1-0 and a 10-man O'Higgins held on for a 0-0 draw at Deportes Iquique.

Nicolas Medina scored an 80th-minute winner to lead San Marcos to a 2-1 win at home to Union La Calera.

Ruben Farfan salvaged a point for Antofagasta as they drew 1-1 at Cobresal and Rene Lima's late penalty saw Union Espanola past Cobreloa 2-1.

Audax Italiano made it back-to-back wins with a 2-1 victory at Huachipato.