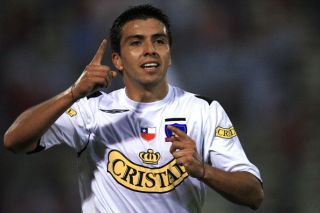 Hector Tapia's men remain unbeaten through four matches and usurped Palestino on goals scored to sit pretty in first place - with the teams equal on 10 points and goal difference of plus-six.

It took Colo Colo 38 minutes to find their first goal on Saturday at the Estadio Tierra de Campeones.

Esteban Paredes received a long ball from defence, and went on a dazzling run down the left side of the park before looping a cross into the back post where Emiliano Vecchio did the rest from a sharp angle.

Gonzalo Fierro doubled Colo Colo's lead a minute out from half-time, converting a penalty given after Paredes was fouled inside the area.

After having a big hand in the first two goals, Paredes was finally handed his chance to score - and he scuffed a shot into the back of the net despite a late lunge from an Iquique defender.

Fierro then was tripped inside the area, handing Colo Colo their chance for a fourth - and Felipe Flores duly converted from the spot.

Rodrigo Diaz gave the home fans something to cheer about, when in the 65th minute, he lashed home an unstoppable long-range left-footed strike to pull a goal back.

But there would be more pain for Iquique, as Mauricio Zenteno was dismissed on 71 minutes - earning a second yellow for a sliding challenge on Flores.

Fierro added his second, and Colo Colo's fifth, when he finished off a well-worked move six minutes later, before Iquique scored another consolation goal via Santiago Romero in injury time.

Palestino had moved top earlier on the weekend, with a late 1-0 home win over Universidad Concepcion.

Nicolas Suarez scored in the 90th minute to preserve their unbeaten status - one of four teams without a loss so far - and also condemn Concepcion to their first loss after three straight wins.

O'Higgins sit fourth, and are also unbeaten, after they accounted for bottom side Everton 2-0 away from home.

Universidad Catolica battled with 10 men for the best part of the second half but held on for a 1-1 draw away to Audax Italiano.

A Gustavo Canales brace saw Union Espanola to a 2-1 road win over Huachipato, while Antofagasta - the other unbeaten team - earned their first win of the season with a 1-0 victory over Cobresal.