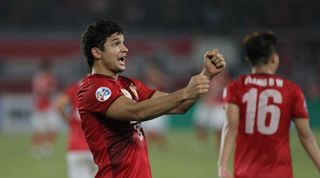 Marcello Lippi's side were emphatic victors at the Tianhe Stadium on Sunday as they maintained their six-point advantage at the top with three matches remaining.

Elkeson's second-half double also leaves him on the verge of a personal record, the Brazilian needing just one more goal to break Li Jinyu's record of 26 in a campaign set in 2006.

Yu Hanchao put the league leaders ahead with a neat finish on 11 minutes and Evergrande remained one goal to the good at the break.

Elkeson's first came four minutes before the hour mark as he pounced on a loose ball inside the penalty area to fire low into the bottom corner from 12 yards.

He then doubled his tally from the penalty spot, with Wu Wei seeing red for bringing the striker down.

Alessandro Diamanti rounded things off in stoppage time and Evergrande retain a healthy lead over Beijing Guoan at the summit.

Beijing, who travel to the leaders on October 26, ensured any title celebrations were kept on hold as they recorded a 2-1 win over Shanghai Shenxin and extended their unbeaten run to seven league games.

Dejan Damjanovic netted his fifth goal in four games to give Beijing an early lead, with Lang Zheng securing the points despite a late Everton consolation for Shenxin.

Guangzhou R and F got back to winning ways against Guizhou Renhe, a 1-0 victory keeping Sven-Goran Eriksson's men on course for a top-three finish.

Abderrazak Hamdallah struck the only goal of the game on 31 minutes as R and F put their derby defeat to Evergrande behind them.

Shandong Luneng and Shanghai SIPG - who are five and seven points respectively behind the third-placed side - cancelled each other out in a goalless draw.

Harbin Yiteng suffered another blow in their fight for survival as they lost 2-1 to Shanghai Shenhua and had Dori sent off for two bookable offences.

Harbin remain at the foot of the table, six points from safety, but Henan Jianye climbed out of the bottom two with a win over fellow strugglers Liaoning Whowin.

Rafael Marques' strike gave Harbin a 1-0 win and saw them climb two places in the table, dropping Shanghai Shenxin into the relegation places.

Elsewhere, Changchun Yatai and Tianjin Teda could not be separated in a game that finished 1-1 and Dalian Aerbin rescued a 2-2 draw against Jiangsu Sainty thanks to Bruno Meneghel's stoppage-time penalty.