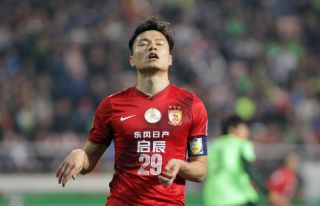 Trailing 1-0 at home to their struggling visitors with eight minutes remaining, the defending champions showed their battling qualities to come from behind and clinch their sixth consecutive league victory.

Everton's goal had put the away side in the lead in the 63rd minute, but Shenxin then saw Jailton Paraiba sent off 14 minutes later for a second bookable offence.

The hosts capitalised on their man advantage, equalising through Gao Lin, before Yu Hanchao struck in the second minute of stoppage time to complete the turnaround.

That result meant the six-point gap between Evergrande and Beijing Guaon remains after the latter also came from behind to overcome Tianjin Teda 2-1 at home to keep their hopes alive with five matches still to play.

Andrezinho had given Tianjin the lead in the 36th minute, but the home side hit back immediately through Erton Fejzullahu.

The forward netted his second with 19 minutes remaining, before the visitors saw Zhou Haibin sent off a minute from time.

The most entertaining game of the round came at Hangzhou, who were beaten 4-3 at home by Liaoning Whowin.

Liaoning went two up thanks to goals from Aleksandar Jevtic and Zhang Ye, with Derick Ogbu restoring the two-goal advantage after Anselmo Ramon had halved the deficit.

Hangzhou got themselves back on terms thanks to Davy Angan and another from Ramon, but Zhang struck his second midway through the second half as the visitors prevailed.

In the race for the final AFC Champions League berth, Guangzhou R and F took a definitive step towards qualification after beating nearest rivals Shanghai SIPG 2-1.

At the wrong end of the table, bottom club Harbin Yiteng earned their first win in four with a 2-0 triumph at Changchun Yatai, which means they are now four points from safety following Dalian Aerbin's 3-1 home defeat at the hands of Shandong Luneng.