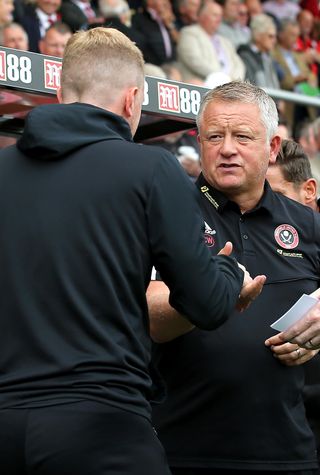 Sheffield United boss Chris Wilder has spoken of his respect for Bournemouth counterpart Eddie Howe and is surprised he has yet to manage an “elite club”.

Howe has spent the majority of his managerial career, which began in 2008, with Bournemouth while he also took in a short spell at Burnley between January 2011 and October 2012.

In an achievement that closely resembles Wilder’s at Bramall Lane, the 42-year-old has taken the club he used to play for from League Two to the Premier League.

Since winning promotion to the top flight in 2015, Howe has kept the Cherries in the division. However, this season has been a struggle and Bournemouth are firmly in the clutches of a relegation battle.

The Blades host Bournemouth on Sunday and, ahead of the match, Wilder said: “I’m surprised he’s not managed an elite club.

“You can only do what you do and win football matches, but look at what he’s done with Bournemouth. Almost going out of the Football League and to be a Premier League club in a short period of time is an incredible achievement – and then to stay in there.

“They’re not one of biggest clubs in the Premier League but they work with young players and create a team.

“I am surprised. For me, he’s an outstanding manager season in, season out, regardless of what’s happened this season.

“They’ve picked up a couple of great results recently. The pressure was on when they lost to Watford but again they showed what they’re about with two really good home results.

“They’ve done it season in, season out. They’ll have had periods of losing three, four, five games on the bounce. We talked about that ourselves at the start of the season and it can happen. We have to be mindful of it.

“But you have to come out of it and they have, with good performances and results. Which will give them good heart heading into Sunday.”

David McGoldrick could be back in the Blades squad on Sunday. The former Southampton striker has missed the last four matches with a foot problem but Wilder said he had been “back on the grass” this week.