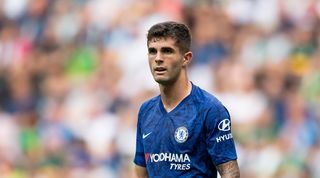 Chelsea manager Frank Lampard has assured Christian Pulisic that he will be given plenty of opportunities to play this season.

The United States international moved to Stamford Bridge from Borussia Dortmund this summer in a deal worth £58m.

The transfer was agreed before Chelsea were hit with a two-window ban on registering new players for breaching FIFA regulations on the signing of foreign players under the age of 18.

Pulisic was the only new arrival in west London ahead of the 2019/20 campaign, but he has been a peripheral figure in the first few weeks of the season.

The former Dortmund forward was an unused substitute in Sunday’s 2-1 defeat by Liverpool, with Mason Mount and Willian selected in support of Tammy Abraham.

Pulisic has been included in Lampard’s starting XI in just three of the Blues’ six Premier League matches so far, and he has only completed the 90 minutes on one occasion.

However, Lampard insists the 21-year-old is very much in his plans and has pledged to give him opportunities to impress in the coming weeks and months.

“I have a squad to pick from, I decided to go with Mason today,” the Chelsea boss said in his post-game press conference.

"These are my choices to make. Christian is a young player as well. His chances will come. There are people on the bench.

“The reality is younger players have come into the team. We lost two No.9s we had last year and we can't change that.

“People say the [transfer] ban is a bad thing for Chelsea and in the short term, of course, but in the long term if we can have a vision, with the likes of [Fikayo] Tomori, Mason, Tammy, hopefully it will be really good for us. But in the short term there might be occasions with things like today happen.

“Performance wise, we were the better team. We had more energy in our game, character and spirit. That’s why the crowd applauded at the end. Let's take this forward.”

Chelsea host Grimsby in the third round of the EFL Cup on Wednesday, before a meeting with Brighton in the Premier League on Saturday.