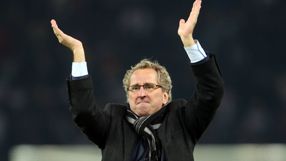 Addressing a news conference on Wednesday, Hamren said he had not slept all night and that he regretted not having spent more time with his players to savour one of the greatest sporting comebacks in Swedish history.

"That's the saddest part with the national team - we have a result like this and enjoy it, like we did last night," he said of the remarkable World Cup qualifier in Berlin the previous evening.

"But then I said it when we were eating breakfast and almost everyone was gone. It's very sad."

When Mesut Ozil fired home an angled drive to put Germany 4-0 ahead just before the hour mark, Hamren's side looked dead and buried.

However, Zlatan Ibrahimovic scored a header to get Sweden on the scoreboard and when full-back Mikael Lustig added a second a minute later, the fightback was well and truly on.

"He probably didn't feel that great at 4-0, but it was a lot more fun at 4-4. He went around and thanked all the players. It was appreciated," Hamren added.

"I felt sorry for him [Low] when he came into the corridor on the way in to the press conference," he said.

"I wouldn't like to be in his shoes. I imagine that he's getting the criticism today that I would have gotten had we lost - maybe even more.

"I think it was 4-1 when [goalkeeper Andreas] Isaksson made a fantastic save. If it hade been 5-1 there they would have got their belief back. But he makes the save and we score 4-2. There's a lot of factors at work."

The unlikely draw kept Sweden in second place in Group C on seven points, three behind Germany and one ahead of Ireland, who they meet in their next qualifier in Stockholm on March 22, 2013.