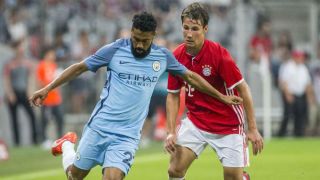 Guardiola is in the opening weeks of his tenure at the Etihad Stadium and, as he attempts to overturn the lethargy that saw City stumble to a fourth-place finish in the Premier League last season, he is taking a hard line on diet and indiscipline.

Pizzas are not on the menu for Guardiola's squad this season and Clichy confirmed some squad members have already been required to shape up away from the main group during the pre-season tour in China.

"On the field, outside the field, every detail counts," Clichy told reporters. “For example, you often hear managers say being healthy is really important.

"With him, if your weight is too high, you're not training with the team.

"That is the first thing and you can hear it a lot, but for my part it's the first time any manager has really done it. So we have a few players who are not training with the team yet."

Clichy, 31, is about to embark on his 14th consecutive season playing in England's top flight, and the experienced campaigner welcomes Guardiola's war on junk food.

"He cut out some juice and pizza and all the heavy food is not allowed," the Frenchman explained.

"Some people think, 'That's normal, it should be like this.' But in truth it's not always like this and I know because I've been playing football for a long time. It's really refreshing and very exciting."

Once the stragglers in City's squad are back, Clichy believes there is boundless potential to improve under a coach who has deeply impressed him.

"He's an ideal manager for any kind of player," he added.

"The goalkeepers need to be better with their feet, the centre-backs are improving, the full-backs are important, the centre midfield – he said something like if he could play 11 midfielders, he would play them, so I guess for a midfielder it's unbelievable.

"I can even tell you that the assistant manager will improve, so he's the kind of guy that, if you're lucky to work with him during your career, he is someone you will remember for a long time because he's truly impressive."