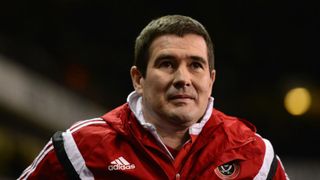 League One leaders Burton Albion have turned to a familiar face to fill the void left by Jimmy Floyd Hasselbaink's departure, appointing Nigel Clough for a second spell in charge at the Pirelli Stadium.

The 49-year-old is back at the club where he cut his managerial teeth. He took over at Burton in October 1998, at first as player-manager, and stayed for over a decade before moving on to Derby County.

Clough, who was sacked by Sheffield United in May, finds himself returning to Burton after Hasselbaink accepted the opportunity to take charge at Championship club QPR.

"We have enjoyed a great start to the season under Jimmy and his assistant David Oldfield and Nigel Clough is the ideal man to continue that work," Burton chairman Ben Robinson told the club's official website.

"He has a tremendous track record in football as both a player and a manager and during a 10-year spell at Eton Park, and then the Pirelli Stadium, has already shown his tremendous passion and commitment for Burton Albion.

"We are delighted to welcome him back."