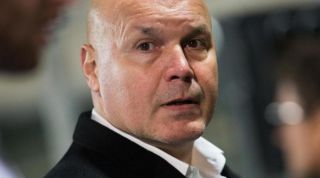 Marseille are five points behind fourth-placed Saint-Etienne, who occupy pole position in the battle to secure a place in Europe's secondary club competition, and three adrift of Lyon in fifth.

Ahead of Friday's trip to Nantes, Anigo wants his squad to remain confident of upsetting the odds by overhauling their rivals.

"The objective remains to get a good result against Nantes and stay in the race (for fourth) with Lyon," the Ligue 1 website quotes him as saying.

"Outside the top three it is such a tight league but we need to believe we can do it.

"We got a couple of good results against Ajaccio and Montpellier. Against Lille (in a 0-0 draw last Sunday) we didn't do well going forward but we were solid, although you need more than that to beat a team of their quality."

Anigo, who took over from Elie Baup in December, could see his reign come to an end in the near future, with Marcelo Bielsa expected to take charge at the Stade Velodrome.

Florian Thauvin recently gave his backing to likely boss Bielsa and Anigo believes the 21-year-old can continue to blossom.

"Florian has a great future ahead of him," said Anigo.

"He's just a kid. I am still convinced that he will become a great, great player and hopefully (do so) here."