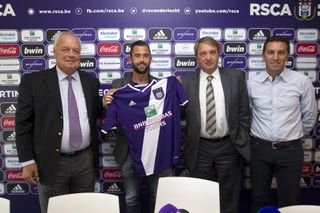 Anderlecht announced they had secured Defour's signature on Wednesday after PSV had been tracking the 26-year-old for a number of weeks.

But having reportedly offered Porto €5 million for the 26-year-old, PSV were trumped by Anderlecht, who paid €6m to sign the former Standard Liege man on a five-year deal.

It was a big blow to Cocu, who had described Defour as PSV's "missing link".

But the 43-year-old former Netherlands midfielder claimed he has already moved on from being snubbed by Defour.

"It is as it is," Cocu told De Telegraaf.

"We are turning to other options, which we had already been discussing."

To add to the sense of 'what might have been' for Cocu and PSV, Defour's agent Paul Stefani claimed the Belgium international would have preferred to play for the Eredivisie club.

"But Anderlecht put in a big financial effort and I think their good relationship with [Luciano] D'Onofrio [who has a share of Defour's transfer rights] has also played a role."