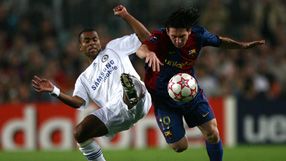 Cole, a two-time beaten finalist, spoke about his memories of Chelsea’s 1-1 draw with Barcelona in 2009, which saw the Catalan club progress to the final on away goals.

“In the first leg I didn't play, [Jose] Bosingwa played left-back, and he did a great job on [Lionel] Messi and the right winger,” he told the club's official website.

"At home we were unlucky, but with teams like Barcelona we try to think about our own game, we know how to stop them, but is it going to happen on that day? You never know.

"With everything that went on in the game, with the so-called penalties that we should have had, and then to have that in the last minute, that was for me one of the best games I have seen a Chelsea team play, with fight, determination and spirit.

"Then of course, he [Andres Iniesta] just pops up with a great strike. But that's what they've got, that's all they need, one shot."

Chelsea’s season has been rejuvenated since Roberto Di Matteo replaced Andre Villas-Boas in the Chelsea dugout, and Cole believes the Blues can take inspiration from the 4-1 win against Napoli, which saw them overturn a 3-1 first-leg defeat.

"We always had confidence and faith that we could overturn the 3-1 deficit. When we lost out there [Napoli] we still had chances to score goals, and I think we should have gone 2-0 up before we even went 3-1 down, so it's one of those things.

"But we always had confidence in coming back at home, and with the fans and the atmosphere we knew that we could score goals against them. Of course, when the first one went in, it gave everyone a lift. And it just gave us our confidence back to say we belong here, we deserve to be here, we're good enough to do it, and then of course the goals just kept flowing."

The rivalry between Chelsea and Barcelona has produced some truly epic games in recent years, and Cole feels that his side has an extra advantage with the addition of three Spaniards since the clubs last met.

"They're not worried about us, but they know from the teams they've played in the Champions League, and the Premier League, we will probably give them the hardest run," said Cole.

"It's an advantage, because of course Oriol [Romeu] has been at Barcelona, so he is probably going to know a little bit more.

"But Juan [Mata] has played against them many times, and so has Fernando [Torres] in his time in Spain, so maybe it can give us a little insight into how they might go into this game."

Cole is one of three Chelsea players walking a disciplinary tightrope ahead of Wednesday’s first leg, knowing a yellow card will rule him out of the return fixture at Camp Nou.