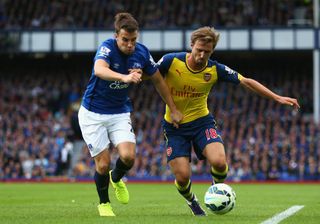 Roberto Martinez's men are still searching for their first win of the 2014-15 campaign after conceding two late goals to draw 2-2 at home to Arsenal on Saturday.

Two goals in the first-half from Coleman and Steven Naismith had Everton on track for maximum points but the home side conceded two goals in the final seven minutes as they were forced to share the spoils at Goodison Park.

It was the second consecutive 2-2 draw for Everton, having twice surrendered a lead at newly promoted Leicester City in the opening round.

But Coleman is refusing to blame a lack of conditioning for late goals.

"I don't know. I think we're as fit as any team – we've got a lot of fit lads," Coleman told The Mirror.

"We were controlling the game and getting on the ball and passing it but then they got their goal and got their tails up.

"I missed parts of pre-season but I felt fine out there so I don't think it's anything to do with stamina or fitness."

Despite walking away with a point, Coleman is adamant Everton will challenge for the European positions once again.

"We know we can give anyone a game if we all click and get it right for the full 90 minutes," the Republic of Ireland international said.

"We're a top, top team and it's just a matter of doing that now.

"The manager will work with us to cut out those errors and like a top team we need to brush ourselves down and kick on again."