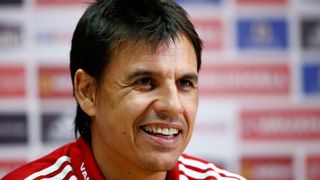 Chris Coleman will not allow club managers to dictate what players he uses for Wales as he begins preparations for Euro 2016 with a friendly against Netherlands on Friday.

The Wales boss came under fire from Arsene Wenger for his use of Arsenal's Aaron Ramsey last month when the Frenchman felt he should have been rested.

Coleman says his disagreement with Wenger is now "done and dusted", but reiterated his plans to play the best side available to him for every international fixture.

"We shouldn't be looked at as a vehicle for players to get rest," he said. "We're here to do a job.

"I'll rest a player if he's had a knock, he's in danger of something happening. If he's so fatigued, or he's had an injury and coming back.

"I don't think it's for anyone else to say who we are picking and why, as long as we send players back in a fit any healthy state, which 99 times out 100 we do, it's not for anybody to suggest who we pick and play.

And Coleman says the decision not to use Real Madrid forward Gareth Bale – who is struggling with a calf complaint – for the match in Cardiff shows he would not take a risk with any of his players.

He added: "He's had a tough time with injuries, it's been a bit stop start, it's definitely the right way to go for us and Madrid and most importantly for Balely.

"It was encouraging for him to get through that and we think he will be here this weekend, it will be good to see him, but it [resting him] is definitely the route for us to take.

"It is all about the player, the player is the most important with his health and well-being so we have definitely taken the right option."