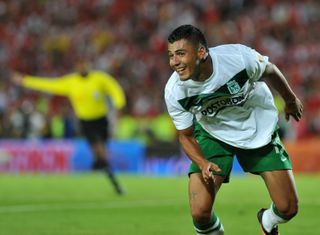 Jefferson Duque scored the only goal of the game as league leaders Atletico Nacional claimed a 1-0 win at Once Caldas.

Both teams were reduced to 10 men late in the encounter but Juan Osorio's men held on to move 10 points clear at the top.

Duque's 13th-minute goal was enough for the visitors, who were reduced to 10 men when Diego Peralta was sent off.

Jonathan Lopera had been red-carded for Once Caldas in the 77th minute – moments before Peralta.

Deportivo Pasto were reduced to nine men and held to a 2-2 draw at home to lowly Atletico Huila, who capitalised on their numerical advantage.

Cesar Hinestroza gave the visitors an early lead before Deportivo Pasto hit back in the eighth minute through Yerry Mina.

Julian Lalinde put them ahead from the penalty spot on 55 minutes before Nicolas Palacios was red-carded.

They were reduced to nine players on 69 minutes when Fram Pacheco was sent off and Atletico Huila took advantage with Cristian Canga scoring an equaliser.

Yulian Mejia's goal was all Medellin needed in a 1-0 victory over Deportes Quindio and Envigado and Itagui drew 1-1 in a match which featured three red cards.