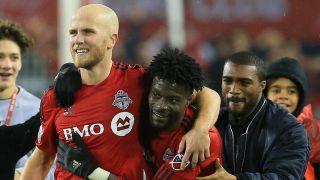 Toronto trailed with nine minutes remaining until Canada international Ricketts turned the match on its head in Columbus on Wednesday.

A first-half replacement for Chris Mavinga, Ricketts equalised in the 81st minute before scoring again at the death as Eastern Conference leaders Toronto posted a fifth consecutive victory for the first time in their history.

Toronto are four points clear in the east, though second-placed Orlando City have two games in hand, while the Crew are two points further back.

Columbus made a fine start in the 28th minute thanks to Federico Higuain at MAPFRE Stadium, the older brother of Juventus star Gonzalo.

Ola Kamara drew a foul inside the penalty area and Higuain converted cheekily with a 'panenka' kick.

Jozy Altidore had the chance to restore parity with a penalty of his own 10 minutes later but the former Sunderland forward saw his effort saved by goalkeeper Zach Steffen.

Toronto team-mate Ricketts, however, spared Altidore's blushes with a late equaliser as he went on to win the match with a close-range strike at the back post.