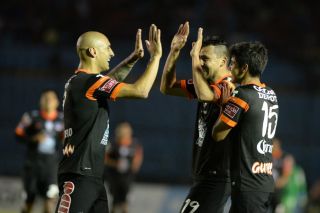 A four-goal first half and striker Dario Carreno's hat-trick set the tone as the Liga MX outfit ran riot away from home at the Estadio Nacional Mateo Flores in Guatemala.

Pachuca have two wins from two matchdays in Group One to be on six points, five clear of Real Espana and Municipal.

If Pachuca's 4-1 opening win against Real Espana was not ominous enough, Wednesday's would have done the trick.

Carlos Ruiz opened the scoring for Municipal in the 13th minute but it was all downhill for the home side from that point as Pachuca pilled on four unanswered goals.

Aviles Hurtado and Carreno were on target in the 16th and 20th minutes respectively, before Ariel Nahuelpan made it 3-1 from the penalty spot with six minutes remaining in the half.

Carreno bagged his second of the match in the first minutes of added time as Pachuca cruised to the half-time interval, though Diego De Souza reduced the deficit four minutes after the break.

Erick Gutierrez restored Pachuca's three-goal lead just shy of the hour-mark, only for Municipal to hit back through Ruiz's 75th-minute penalty.

Wednesday's other match saw Leon play out a 1-1 draw at home to Herediano as Group Seven goes down to the wire.

Herediano looked set to return to Costa Rica with maximum points thanks to Francisco Calvo's 65th-minute strike but Mauro Boselli salvaged a point for the Mexican hosts one minute from time.

Both Herediano and Leon are locked on four points from two games but the Costa Ricans sit top due to their superior goal difference, while Isidro Metapan are winless.