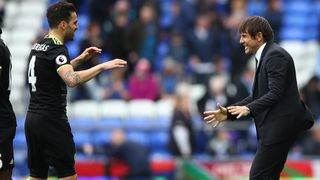 Fabregas came off the bench to set up fellow substitute Willian for the sealer in a 3-0 win at Everton on Sunday.

A stunner from Pedro and Gary Cahill's goal had earlier given Chelsea control on their way to retaining a four-point buffer atop the table.

Conte was full of praise for Fabregas, who has started just 10 league games this season, as well as Willian.

"I think Cesc is a player in this part of the season is showing to be decisive in every moment," he told a news conference.

"If he starts the game [or if] he came on during the game.

"Also Willy, I know very well that it's not easy for a player who is used to playing every game and to come on during the game.

"But I must be pleased with them because they are showing me to be great men and fantastic players."

One step closer.Thank you for your fantastic support today! April 30, 2017

It was a 25-yard stunner from Pedro which finally put Chelsea ahead in the 66th minute at Goodison Park.

The goal was the former Barcelona man's 12th in all competitions, but Conte expects even more from the 29-year-old.

"I think Pedro is showing to be a great player. But, don't forget Pedro played for Barcelona and he won a lot with this club," Conte said.

"And he's a great player, he's having a fantastic season. But for sure, he must continue on this way and finish this season to win.

"Otherwise for him it's a good season, not a fantastic season."