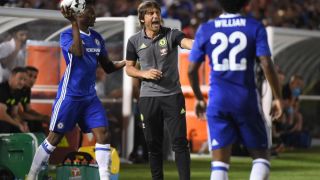 Chelsea head coach Antonio Conte wants his players to develop aggression and intensity under his guidance.

The former Juventus and Italy boss is well-known for his energy on the sidelines, showcased at times during his side's 1-0 International Champions Cup win over Liverpool.

Conte saw midfielder Cesc Fabregas sent off during the victory, shown a red card for a rash studs-up challenge.

But the 46-year-old is eager for his side to be combative and intense, saying it was something Chelsea needed to be recognised for.

"I like it if my team plays with great aggression and high intensity. I like to see that," Conte said.

"We train to prepare for that because I want my team to have an identity. I want it so that if you see us, you recognise 'Oh, Chelsea are playing'.

"That is important for me, important for the club and the owner. Everywhere I have been I have worked at that. I always gave an identity to my teams.

"I am searching to transfer this to my players now, and I am pleased because I see a great attitude."

Happy with what he has seen so far, Conte urged his men to maintain their levels as they look to rebound from a 10th-place Premier League finish last season.

The Italian said: "I want to continue in this way because this is the only way to come back very soon for the title, not to speak, but with actions.

"Now is not the moment to talk."