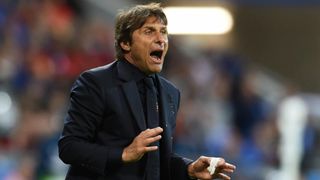 New Chelsea manager Antonio Conte put specific focus on tactical approaches as he led his first training session since being appointed on Wednesday.

The former Juventus boss took up duties at Stamford Bridge this week after leaving his role as Italy head coach following their Euro 2016 exit to Germany.

Conte conducted morning and afternoon sessions at the club's Cobham training ground on Wednesday, and was described as "very vocal" as he instructed his new squad.

"The players spent a long period working on patterns of play and keeping the ball," Chelsea said via their official website.

"Conte was heavily involved and very vocal throughout the session, regularly stopping each drill to offer advice and encouragement, both to individual players and the group as a whole."

Conte will hold his first media conference as Chelsea boss on Thursday at 1400 local time.

His first match in charge takes place in Austria this Saturday against Rapid Vienna.