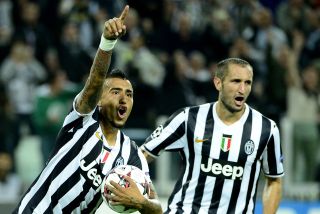 The Chile international did not return to Turin until late on Friday after missing his flight following his country's 2-1 victory over Ecuador that sealed their place in next year's FIFA World Cup finals.

With Juve facing Fiorentina in Serie A on Sunday, Conte had wanted all his squad back in time to train together on Friday.

However, midfielder Vidal was unable to take part, and Conte has said he will talk to the 26-year-old before deciding whether he has broken club rules.

"I haven't spoken to Vidal yet," the manager said. "I need to understand why he was so late.

"He wasn't at training yesterday either.

"Will he be punished? The rules are the same for everyone."

Part of Vidal's punishment could see him left out of the champions'' visit to Florence, a game Conte knows will be a challenge as they look to close the gap on Serie A leaders Roma.

"The Viola (Fiorentina) are a great team with a wonderful project in place," he added. "This side was built to improve upon last season’s fourth-place finish, so they are not a surprise.

"Anyone who faces them is on the alert.

"If we want to do something extraordinary this year, then we'll have to fight to get it. If we are aware of that fact, then we can do it."