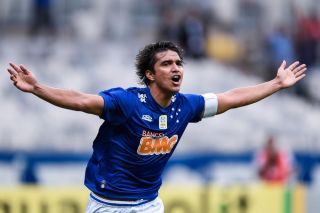 Bolivian attacker Marcelo Moreno bagged a brace as the Brazilian Serie A champions produced a masterclass in the first leg of their last-16 clash at the Estadio Governador Magalhaes Pinto.

Cruzeiro - seven points clear in Brazil's top flight - went into Wednesday's fixture against Campeonato Alagoana opponents Santa Rita in the midst of a 10-game unbeaten streak in all competitions.

And Marcelo Oliveira's men extended that run thanks to a dominant first half that yielded three goals.

Moreno opened the scoring after eight minutes in Belo Horizonte, looping a header over goalkeeper Jeferson from Alisson's cross.

Centre-back Dede doubled Cruzeiro's lead in the 18th minute, when he headed home from a corner.

Former Arsenal and Real Madrid man Julio Baptista made it three with a header across goal in the 35th minute before Moreno doubled his tally nine minutes after the interval.

It was a different story for Serie A rivals Corinthians, who must overturn a one-goal deficit in the return leg after losing 1-0 at Bragantino on Wednesday.

Sandro Mendonca's 56th-minute goal gave the second-tier side a surprise 1-0 win in Cuiaba, while it condemned Corinthians to back-to-back defeats.

Corinthians' woes were compounded in the third minute of injury time, when midfielder Ferrugem received his marching orders.

Mineiro were 1-0 victors at Palmeiras on Wednesday, with Luan's glancing header in the 71st minute the difference after Henrique missed a penalty for the home side in the first half.

David Braz and Milan loanee Robinho were both on target in the opening half as Santos upstaged Luiz Felipe Scolari's Gremio 2-0 away from home on Thursday.

Coritiba will take a three-goal advantage into the second leg after accounting for visitors Flamengo 3-0 on Wednesday.

Rodrigo Pimpao, Max and Thiago Cristian found the back of the net for America RN.

Ceara netted two crucial away goals as they prevailed 2-1 at Botafogo on the same day.

Meanwhile, hosts Vasco da Gama were held to a 1-1 draw by ABC on Tuesday.