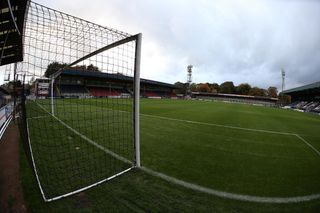 Vasco drew the two-legged tie 4-4 after a 3-2 win at home that was not enough to get them through to the semi-finals.

It was a disappointing result for Vasco, who led 2-0 after 17 minutes after a quick-fire brace from striker Thalles.

Goias hit back in the 19th minute when Hugo found the net before Amaral's goal on 56 minutes tied the match and put the away side ahead on aggregate.

There was time for Vasco, who are struggling in the Brazil Serie A, to score their third for the match through Willie but they were unable to find the crucial goal they needed.

Goias' semi-final opponent will be Flamengo, who cantered to the next stage with a 5-1 aggregate thrashing of Botafogo.

With the tie evenly poised after a 1-1 draw at Botafogo, Flamengo blew the tie open in front of their fans with Hernane scoring a hat-trick and Leo Moura's penalty rounding out a comfortable victory.

Atletico Paranaense also advanced on away goals after a 0-0 draw against Internacional.

The 1-1 result achieved in the first-leg at Internacional was enough for Atletico PR to progress and they will meet Gremio in the semis.

It took penalties for Gremio to advance after both legs of their tie with Flamengo finished 0-0.