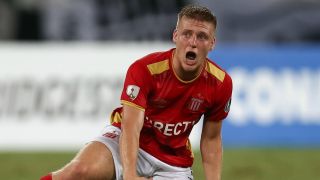 Estudiantes and their hopes of reaching the Copa Libertadores last 16 were dashed by Botafogo despite beating Barcelona.

Juan Sebastian Veron's Estudiantes needed a win from their penultimate match on Thursday and they achieved that – accounting for Barcelona 3-0.

However, they also required Botafogo to lose but the Brazilians did not read the script as they edged defending champions Atletico Nacional 1-0.

The results in Group 1 saw Botafogo and Barcelona move level on 10 points, four clear of Estudiantes and seven ahead of Nacional.

Playing in Ecuador earlier on Thursday, Estudiantes kicked off at Estadio Monumental Isidro Romero Carbo in Guayaquil with only victory on their mind.

And Juan Cavallaro kept the Argentine team's slim chances alive with his 29th-minute strike – the forward side-footing from inside the penalty area.

Facundo Sanchez stole the show in the second half, netting twice as former Manchester United and Chelsea midfielder Veron – now Estudiantes president – came off the bench to help complete the scoring.