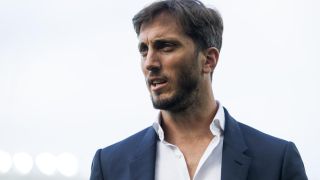 Cerro Porteno made it two wins from two in the Copa Libertadores group stage, while Universidad Chile and Libertad opened their accounts on Tuesday.

A brace from Diego Churin helped Cerro Porteno to a 2-1 victory over Defensor Sporting in Group 1.

Churin headed in the opener in the ninth minute, but that was cancelled out by a Carlos Benavidez strike.

But the Paraguayan hosts claimed all three points in dramatic fashion, Churin poking in a Santiago Arzamendia pass in the 96th minute for the winner.

Luis Zubeldia's Cerro Porteno sit top of the group on six points, while Defensor Sporting were left on one point.

Universidad Chile started their campaign in Group 5 with a 1-0 win at Vasco da Gama.

Angelo Araos scored the game's only goal with a low finish in the 77th minute.

In Group 3, Libertad recorded a 2-0 win at Atletico Tucuman thanks to second-half goals from Santiago Salcedo and Rodrigo Alborno.