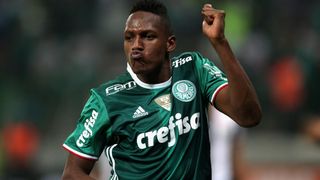 Palmeiras sealed top spot in their Copa Libertadores group as Wilstermann joined them in the last 16 despite a loss.

A 3-1 win over Atletico Tucuman in Sao Paulo on Wednesday was Palmeiras' fourth victory in six Group 5 games.

Yerry Mina put the Brazilian giants ahead in the 15th minute, completing a fine set-piece move.

Still a chance of progressing, Atletico Tucuman levelled in the 56th minute through a Luis Rodriguez header.

But Palmeiras restored their lead through Willian before former Bayern Munich and Brazil star Ze Roberto volleyed in a late sealer.

Palmeiras finished top of the group on 13 points, four clear of Wilstermann – who suffered a 2-0 loss at Penarol.

Junior Arias and Ivan Villalba scored in the first half in Montevideo, where the clash was played behind closed doors after violence in the club's previous home match in the Copa Libertadores.

Guzman Pereira was sent off early in the second half for Penarol, who were already eliminated and finished bottom of the group.

But Wilstermann progressed despite their loss, ending up two points clear of third-placed Atletico Tucuman.