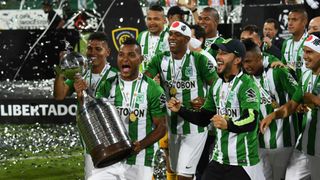 The Colombian side beat Independiente del Valle of Ecuador 2-1 on aggregate in the final, taking their second continental title thanks to Borja's early second-leg strike.

This goal was the 23-year-old's fifth in just his fourth appearance for Atletico Nacional, having joined last month ahead of the semi-finals against Sao Paulo.

And, after sealing a historic victory for his new club, Borja described what it meant to him.

"This is a dream," he told Fox Sports. "It's a blessing. The glory and honor is of God, it is a dream come true.

"I want to dedicate this to [home town] Tierralta, a humble people, who are in my heart. Wherever I go I will mention my land."

"We worked a whole year long, almost thirteen months, and that win today is the result of all that work," he said.