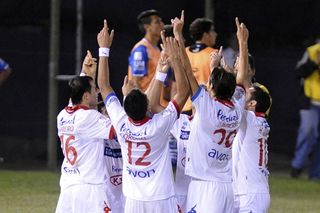 The Argentine hosts had two players sent off in the last 15 minutes as four goals were scored in an action-packed final quarter-hour with Derlis Orue's stoppage-time goal securing a 3-2 aggregate victory for visiting Asuncion after the second leg finished 2-2.

Orue scored on the counter-attack in the 94th minute thanks to an assist from Marcos Riveros, although Asuncion were already set to advance on away goals, and the Paraguayan club will face either Arsenal or Union Espanola in the quarter-finals.

Asuncion had won the first leg in Paraguay 1-0 and remained on top in the two-legged tie until Sarsfield equalised in the 75th minute.

Fabian Cubero picked out Jorge Correa for the home side and the 20-year-old midfielder converted into the bottom corner of the net.

Just three minutes later and Sarsfield suffered a major blow as Lucas Romero fouled Orue in the box and the referee pointed to the spot.

Romero received his second yellow card to be sent off and Silvio Torales converted the penalty for Asuncion.

Correa's second goal with five minutes remaining gave the home side a sniff of a final-eight berth, although Asuncion were still ahead on away goals, but when Hector Canteros was sent off two minutes later, Sarsfield's chances seemed to disappear.

The visitors made the remaining nine Sarsfield players pay in stoppage time with Orue striking on the break.

In the other round-of-16 encounter on Tuesday, Defensor Sporting triumphed over Bolivar thanks to Martin Campana's penalty shootout heroics.

After second-half goals from Defensor's Giorgian De Arrascaeta and Nicolas Olivera saw the Uruguayan hosts level the tie at 2-2, a shootout was required to split the teams, following a goalless extra time period.

Defensor goalkeeper Campana saved the first two spot-kicks from Bolivar, helping the home side to a 2-0 lead in the shootout.

While Andres Fleurquin missed Defensor's next penalty, Adrian Luna and Olivera made no mistake as the Uruguayans eliminated their Bolivian opponents.