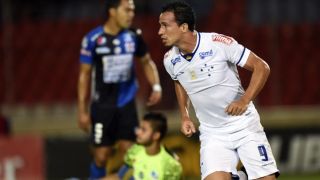 Goals from Leandro Damiao and Marquinhos saw the Brazilian outfit to their first win of the group stages.

That one win is enough to see Marcelo Oliveira's men hold top spot on goal difference, with Club Universitario (also five points), Huracan (three) and Mineros (zero) behind them.

Damiao opened the scoring in scrappy fashion in the 12th minute.

Rafael Romo made a strong save but the loose ball went in the air and Damiao was on hand to head in from close range.

The win was sealed with seven minutes remaining.

Eugenio Mena was released down the left and squared for Marquinhos to scramble in his team's second goal.

Ecuadorian side Barcelona also claimed their first win, a 3-2 victory at Atletico Nacional.

Jairo Palomino headed Atletico into the lead in the 27th minute but Barcelona levelled through Ely Esterilla's header.

Brahian Aleman's long-range effort snuck under goalkeeper Camilo Vargas to put Barcelona ahead early in the second half.

Aleman made it 3-1 in the 52nd minute and they held on despite Yulian Mejia's goal.