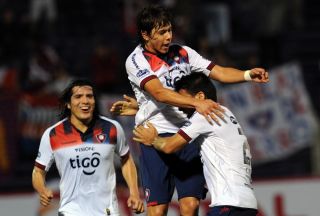 The 2009 Copa Sudamericana semi-finalists will have two away goals to their advantage when they host Uruguay's Rentistas next week, after Oscar Romero and Julio Dos Santos struck either side of half-time for Cerro Porteno.

Huachipato also started strongly in the Copa Sudamericana's first round with a double from Andres Vilches handing them a 3-1 victory over Bolivia's San Jose.

Vilches gave Huachipato the lead in just the second minute in Talcahuano with a header, while Leandro Delgado doubled the hosts' advantage three minutes after half-time with a crunching strike from just outside the area.

Mauro Bustamante dragged San Jose back into the contest in the 52nd minute with a penalty but Vilches confirmed Huachipato's victory with 17 minutes remaining, poking a loose ball past visiting goalkeeper Carlos Lampe after a free-kick was allowed to bounce around in the box.

It was better news for San Jose's compatriots Club Universitario as they trumped Deportes Iquique of Chile 2-0 with Alejandro Bejarano and Martin Palavicini scoring for the home side.

In other first-round first-leg results, Venezuela's Deportivo Anzoategui and Ecuador's Emelec both claimed 1-1 draws on the road at Ecuadorian club Universidad Catolica and Aguilas Doradas of Colombia respectively.