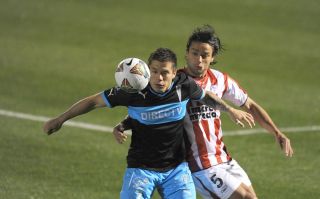 Guillermo Almada's River Plate scored three goals in the second half as they accounted for Universidad Catolica 3-0 at the Estadio Luis Franzini in Montevideo, Uruguay.

Goals from Michael Santos, Santiago Garcia and Cristian Techera helped River Plate to a 4-0 aggregate win over their Chilean opponents after winning the opening leg by a solitary strike.

Libertad were also 3-0 winners in their return leg against Nacional Potosi in Asuncion.

General Diaz, Atletico Nacional, Independiente del Valle and Barcelona also advanced to the next round.

Roberto Gamarra and Victor Genes were on target for Paraguay's General Diaz, who earned a 2-2 draw against Cobresal in Chile, which was enough for a 4-3 victory over two legs.

Luis Ruiz's 53rd-minute goal helped Atletico Nacional to a 1-0 win over Venezuelan side Deportivo La Guaira in Colombia and a 2-1 success on aggregate.

Independiente del Valle from Ecuador were 2-1 victors on aggregate, despite being held to a 1-1 draw at home to Venezuela's Trujillanos in the second leg.

Ecuadorian side Barcelona played out a goalless draw against Alianza Lima in Peru, but still made it through the next round thanks to a 3-0 win on aggregate.

Meanwhile, there was one second-round clash on Wednesday with Bahia edging fellow Brazilian side Internacional away from home.

Lucas Fonseca and Diego Macedo scored in the space of four minutes as Bahia claimed the upper hand ahead of next week's return leg.