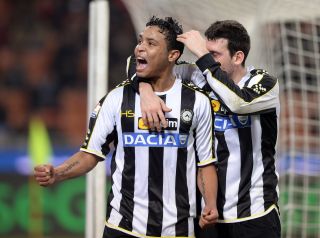 Seedorf – who spent 10 years at the club as a player – retired from his playing career with Botafogo earlier this month in order to take the Milan job and replace the sacked Massimiliano Allegri.

But after watching his side edge Verona 1-0 in the Serie A on Sunday, in the first match of his managerial career, he watched on in frustration as they were bundled out of the competition quarter-finals.

Milan started brightly and took the lead in the seventh minute, as Mario Balotelli scored the second goal of Seedorf's reign at the club.

The hosts quickly broke forward and Kaka's excellent cross from the right was swept in by Balotelli from close range.

Udinese responded well though, and levelled proceedings four minutes before half-time thanks to a Luis Muriel penalty.

Urby Emanuelson conceded the spot-kick, bringing down Silvan Widmer after the pair clashed in the penalty area, and Muriel powered his effort past Milan goalkeeper Christian Abbiati.

In an end-to-end second half, Andrea Lazzari spurned a golden chance, while Muriel was a persistent threat.

But it was 20-year-old Nicolas Lopez who would score the winner, just three minutes after being introduced as a replacement for Muriel.

The Uruguayan finished a long run with a superb left-foot effort that crashed into the bottom right corner from 20 yards with 12 minutes left.

And Milan were unable to muster a response as they bowed out of the competition.