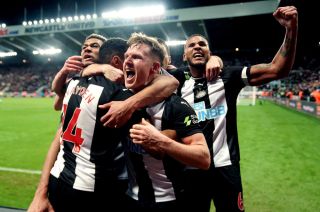 Isaac Hayden’s stoppage-time winner brought joy to Newcastle fans on Saturday evening but for one there was some pain, too.

Amid the rapturous celebrations, following Hayden’s header into the Chelsea net four minutes into time added on, the Magpies’ Matt Ritchie booted the corner flag into the crowd – unfortunately sending it hurtling into a man’s groin.

A viral video taken in the stands showed the fan, in blue jeans and a dark grey jacket, recovering on the steps of the stands at St James’ Park to the amusement of those around him.

“Apologies from Matt Ritchie… and the corner flag,” tweeted Newcastle following the game, sharing a GIF of the moment.

For Scotland international Ritchie, 30, kicking the corner flag has become something of a trademark celebration.

“No one is safe around Ritchie when we score,” posted Twitter user @lasseisd. “Not even the fans.”