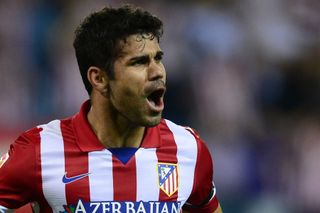 Costa's international future had been at the centre of much speculation, with both Brazil and Spain stating their wish to select the 25-year-old, who has dual-nationality after residing in Spain for more than five years.

However, the Atletico Madrid striker ended months of conjecture on Tuesday as it was announced that he had signed a letter to the Brazilian Football Confederation (CBF) declaring his intention to play for the reigning world and European champions.

The decision provoked the ire of Brazil head coach Luiz Felipe Scolari, who accused Costa of "turning his back on a dream of millions".

But Costa has been quick to clarify why he chose to represent Spain, expressing his desire to repay the country he feels is responsible for his football career.

"I hope people understand and respect my decision because it has been very difficult," he told Atletico Madrid's official website.

"It was very difficult to choose between the country where you were born and the country that has given you everything.

"I looked at everything and saw that it was right and best to play for Spain because this is where I have done everything. All that I have in my life was given to me by this country.

"I have a special affection. Here I feel very appreciated for all that I do and I feel the love of the people.

"I hope people understand because it is not something against Brazil.

"I have family in Brazil and it is the country where I was born. I hope that God allows me to live there again in the future."