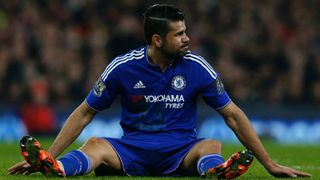 Chelsea forward Diego Costa feels he is still paying for a number of controversial incidents from the past.

The Spain international has been involved in a host of questionable episodes on the pitch since his move to Stamford Bridge in July 2014, earning a reputation he now seems keen to distance himself from.

He made the headlines for all the wrong reasons last season following a stamp on Liverpool midfielder Emre Can, while he was banned for violent conduct this term after a brawl with Laurent Koscielny and Gabriel in the win over Arsenal in September.

Costa was again criticised after playing a role in Per Mertesacker's dismissal for Arsenal this month, but he has stressed he is just giving his all to win on every occasion and is being judged unfairly.

"I am still paying for the things I have done in the past," the 27-year-old told Telefoot.

"I hate to lose games and I love to win.

"I will always remember who I am and where I came from."

The attacker's father, meanwhile, has revealed that Costa's determination to win was apparent in his younger years.

"Whenever he lost a match, he always left the pitch hugely frustrated," Costa senior added.

"He got very angry and kicked everything in front of him."