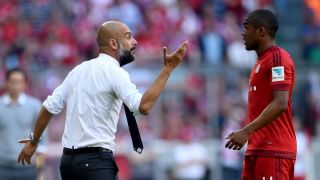 Guardiola brought Costa to the Allianz Arena in July but the pair are set to work together in Bavaria for just a season due to the Catalan's impending exit from the Bundesliga champions.

The former Barcelona boss confirmed last month he will leave at the end of his contract in June - amid speculation he is a target for Premier League trio Chelsea, Manchester City and Manchester United.

Brazil international Costa has previously described Guardiola as a "phenomenon" and revealed he rejected a move to Chelsea in the close-season due to the Spaniard's reputation.

"It's true. I came to Bayern for Pep," the former Shakhtar Donetsk winger told Sport Bild.

"[Guardiola as Brazil coach] would be great. Pep Guardiola is very respected in Brazil as people love his offensive style of football. I think it would be great if I could play with him in the Selecao someday.

"Previously with Brazil there was quick criticism because of a single misplaced pass but today, as a Bayern player, the fans and pundits have more patience with me."

Brazil full-back Dani Alves has previously claimed that Guardiola had shown an interest in leading the national side at the 2014 World Cup.