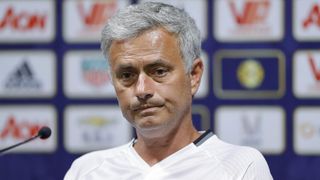 The duo endured a heated rivalry as respective head coaches of Real Madrid and Barcelona and will face each other for the first time as United and City bosses in Monday's International Champions Cup clash in Beijing.

Guardiola said this week that there was no reason they would not shake hands before the match, as they are both "polite guys" who simply "want to win".

And an irritable Mourinho was left equally dumbfounded as to why such scrutiny was being placed on any pre-match trivialities between the two.

"To qualify the question I would use some impolite words," he said, speaking to the media after the scheduled news conference was moved outside because of over-crowding in the venue.

"We worked together at Barcelona and we worked against each other in Spain. I don't see the reason for the question."

Mourinho admitted that his priority is to return to Manchester without any major injury problems, rather than with a morale-boosting win over their rivals.

"The pitch is very bad and the condition of my players is more important than results," he said.

"We cannot just run away and disappear and not play, so we have to play and try to be lucky.

"Normally when we say lucky we say lucky because we want a good result. The result I want tomorrow is to go home without injuries.

"Manchester City have all of their players, we have six, seven or eight, who played in the Euros. What I want is to get back to Manchester and train with the full group.

"[Travelling to China] is good for the fans and for the commercial side of things. We have a good group, we have a good spirit and we cope with it. Tomorrow is the last day and then it is over."