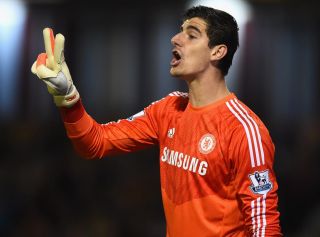 Courtois was chosen ahead of Cech for Monday's 3-1 win at Burnley, with the Czech relegated to watching from the bench.

Chelsea manager Jose Mourinho has given Cech no guarantees for the rest of the season, but did say Courtois had done enough to retain his place.

Courtois said he had plenty to learn from 32-year-old Cech, but the Belgian wants to remain number one.

"Do I want Cech to stay? Of course, in training I can still learn from him because he has a lot of experience, he can give me good tips about the Premier League, things I might not know from the start," he said.

"For the team [it] is better for us to have two good goalkeepers. I don't have a problem if he stays. Hopefully I can play well and stay in the team."

Mourinho had remained tight-lipped throughout the pre-season when quizzed about his goalkeepers.

The Portuguese tactician waited until an hour before his team's league opener at Turf Moor to tell Courtois he was starting.

"The manager told me an hour before the game. It was nice because I came here obviously to play," Courtois said.

"But I know that Petr is a great goalkeeper so there is a lot competition, but when you come back from a successful loan you hope to play.

"Otherwise, it would maybe have been better for me to go to another team."

After the win at Burnley, Mourinho described Cech as a "top professional" who would put pressure on Courtois.