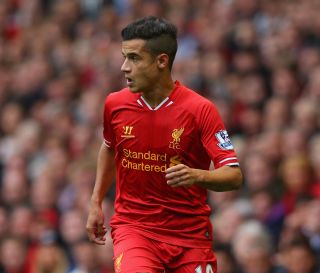 The Brazil international is approaching his one-year anniversary at the club, having made the switch from Inter for a reported £8.5million in the previous January transfer window.

Coutinho has become firm favourite among the Anfield faithful for his direct attacking style of play, and has been a valuable member of a side that sits fourth in the Premier League table just six points behind leaders Arsenal.

But the 21-year-old has only scored two league goals this season is keen to add to his tally in the second half of the campaign.

When asked by the club's official website where he can improve, he said: "My goalscoring, for sure. Sometimes my positioning is not the best and I need to improve that to score more goals.

"I want to continue improving and look forward to working harder and harder on what I need to do to be considered a great player.

"We are quite confident. Our thought is to win every match and start every match doing our best in this battle, and we have to carry on this way.

"Our aim is to be within the first four places at the end of the season and we will try our best to keep ourselves up there."

Coutinho also praised his team-mates for making his transition to the Premier League easy.

He added: "It's a year that went very quickly, and I am living in a very happy moment.

"What surprised me most was the way the players are made to feel at home, and I am grateful to the city, my team-mates and the club for the way I was received."