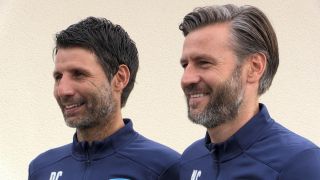 Danny Cowley has set his sights on the Premier League after making the Huddersfield the next step in his “fairytale” managerial career.

Cowley, along with assistant boss and brother Nicky, left League One Lincoln to take charge of the Sky Bet Championship strugglers on Monday.

Together the pair, both former PE teachers, have enjoyed a remarkable rise up the football ladder, first managing in non-League with Concord Rangers and then Braintree Town.

Their success in then taking Lincoln up two divisions from the National League attracted interest from elsewhere, with the Terriers moving in following the departure of Jan Siewert last month.

Unveiled alongside his brother at a press conference on Tuesday, Danny Cowley said: “The short-term objectives are to find a way to play winning football and retain our status in this division.

“It will then be about building a competitive team in the Championship and from there we’ll have the foundations to push on. You have to dream big.

“For Nicky and I it’s been a fairytale. There’s no hiding place from that. We started in the Essex Senior League. You have to believe in football miracles and they have happened here once before in recent history.”

Cowley was referring to Huddersfield’s surprise promotion to the top flight in 2017.

Under David Wagner, the club survived their first season in the Premier League but his departure last term was followed by relegation.

Wagner’s successor Siewert was unable to arrest the decline and was sacked last month after a dismal start to the current campaign.

Cowley takes charge with the club 23rd in the Championship with just one point. They have won one match in all competitions since November 25 last year.

He is under no illusions about the size of the task but felt he could not turn the opportunity down.

“I don’t think it will be easy,” said Cowley, who faces Sheffield Wednesday in his first game on Sunday. “If we thought this job would be easy we wouldn’t have taken it.

“We want to be challenged. I want to live life. The safer option would have been to stay at Lincoln, a club we loved and felt a connection with, but we are not interested in easy decisions. We want to test ourselves.

“I didn’t want to die wondering. I want that moment when your back’s against the wall and facing adversity, that for me that is really living. That is what I am looking forward to.

Danny Cowley will have the title manager but it is clear that he and his brother very much come as a pair.

Danny said: “We are used to working together. We talk together. We have lived our lives in each others’ pockets. We have different skill sets and are different characters but always aligned on the values and processes.

“Most importantly we have trust and in the crazy world of football that is a commodity that is hard to find.”

Nicky added: “We have a very strong bond but we are very much looking forward to creating a bond with the staff, players and supporters. Once you connect with people that’s when you can really start to make changes for the better.”