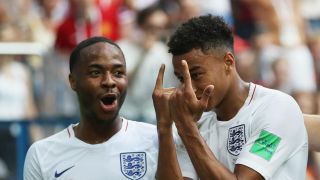 Jesse Lingard's 'JLingz' celebration has been imitated by England supporters during the World Cup and the Three Lions midfielder posted an amazing Instagram mural to pay tribute to his growing army of fans.

Using images of fans pulling his trademark move, Lingard created a series of posts that when put together showed the Manchester United star striking the pose.

Lingard first showed off the move after his stunning strike against Panama, the 25-year-old having first performed the 'shoot dance' that has been made popular by the video game Fortnite.

"Feeling all the support from you guys back home and out here in Russia," he posted. "We'll do everything to make you proud tomorrow."

Turns out Jesse Lingard isn't just creative on the football pitch...Check out this Instagram mural from the Man Utd and England star July 10, 2018

England face Croatia in Moscow on Wednesday in their first World Cup semi-final since 1990.