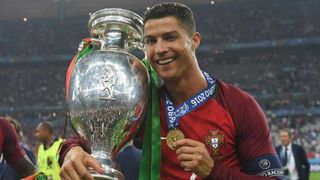 Cristiano Ronaldo feels 2015-16 was the best season of his career after winning the Champions League with Real Madrid before guiding Portugal to Euro 2016 glory.

The 31-year-old previously won the Champions League in 2008, with Manchester United, and 2014, but the addition of success at international level made it a stand-out campaign for the prolific attacker.

"This season has been the best of my career," he told reporters. "I won two major titles, with my club and country, so it was something unique.

"It was a very emotional moment to win the Undecima. Winning the trophy is incredible, every time I look at it I see the memories of when I won it for the first time with Manchester United as well as my triumphs with Madrid."

Ronaldo is now in pole position to win the FIFA Ballon d'Or but is adamant he is not obsessed by individual awards.

"Individual awards are always won without expectations, they are not everything," he added.

"I am not obsessed about whether I have a chance to win it.

"This year I have already won the European Championship and Champions League, both are very important trophies."

The forward sustained a knee injury in the final of Euro 2016, but he is hopeful of making a quick return.

"I am feeling better," Ronaldo continued.

"I want to recover well and I hope to return as quickly as possible."