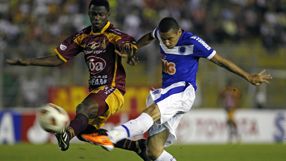 Brazilian champions Fluminense fared worse with a 1-0 defeat away to America of Mexico, while Argentinos Juniors of Argentina upset Uruguay's Nacional 1-0 away in two Group Three matches.

Fabio dived to his left to save Wilder Medina's 76th minute penalty after the striker had been brought down by Marquinhos and keep his goal intact after three matches in South America's elite club competition.

Cruzeiro, who beat four times winners Estudiantes 5-0 to hand the Argentine side their worst defeat in the competition last month, have seven points, three more than Tolima.

Cruzeiro have scored nine goals and are yet to concede in their three games so far. Estudiantes have three points and Guarani of Paraguay none after two games.

Three times champions Nacional gifted Argentinos their goal in the 22nd minute at the Parque Central in Montevideo.

Goalkeeper Leonardo Burian collided with defender Gabriel Marques as they went for a long ball into the box from Argentinos midfielder Gonzalo Prosperi and striker Franco Niell netted the loose ball for his third goal in the group.

"One comes to this tough ground thinking a draw is good business which is why we are so happy," Argentinos coach Pedro Troglio told reporters.

Argentinos, champions in 1985, have seven points from three matches. They are a point ahead of America with 2008 finalists Fluminense on two and Nacional one.

Substitute striker Daniel Marquez scored the only goal at the Azteca in Mexico City in the 71st minute, seven minutes after coming on.

On a disappointing night for Brazilian teams, Santos were held 1-1 at home by Cerro Porteno of Paraguay in Group Five.

Argentine striker Roberto Nanni equalised with a penalty in added time for his fifth goal in the competition after Brazil midfielder Elano had given Santos the lead from the spot early in the second half.