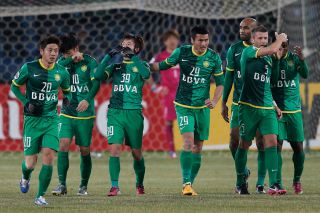 Hangzhou are the visitors to Beijing and they have a battle of their own as they try to avoid relegation from the top flight.

Recent history favours the away side, who will hope to continue their three-game winning run against Aleksandar Stanojevic's side.

However, they have lost four games in a row, while their hosts have not lost at home in the league this season.

Champions Guangzhou Evergrande may have already wrapped up the title but they could have an influence on relegation when they face Qingdao Jonoon.

Qingdao moved out of the bottom two with a win over Tianjin Teda last time out but making it two consecutive victories will be a tall order against Marcello Lippi's men, who have only lost once this season.

Changchun Yatai occupy the second relegation spot but they face Tianjin at home and will be buoyed by the fact that Alexandre Guimares' side have lost against the other two sides in the bottom three this term.

Guangzhou R&F retain hope of reaching the top-three but would need to beat Shanghai Shenxin and win their remaining two fixtures after that, while Beijing and Guizhou would have to lose all three of their final matches.

Second-placed Shandong Luneng are already guaranteed a place in the Champions League next season and cannot be caught, so their match with Jiangsu Sainty only carries significance for the hosts.

Jiangsu have a four-point cushion to the relegation zone, but will want to keep picking up points to avoid being dragged further into the fight.