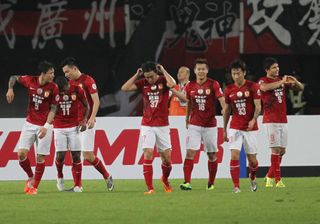 Marcello Lippi's side – who are seeking a fourth successive Chinese Super League crown – were the highlight in a disappointing week for Chinese clubs in Asian football.

Evergrande, who are also trying to defend the Champions League, topped Group G, despite a nervy campaign to date with a 2-1 win over Yokohama F. Marinos of Japan on Tuesday.

Two wins, two defeats and a draw from their first five group matches did not fill Lippi with confidence, but his players produced when it mattered most, as a first-half double from Brazilian Elkeson saw them finish two points ahead of K-League outfit Jeonbuk Motors.

Elimination was a very real prospect for Evergrande heading into the final match, but with their progression now secure, Lippi's men can turn their attention back to league matters.

And they visit a Liaoning side who are hovering just one point above the relegation zone, with six wins in seven enough for Guangzhou to top the table – two points ahead of Shandong Luneng.

Just like Beijing Guoan and Guizhou Renhe, Shandong failed to progress from their Champions League group.

They could have reached the last 16, but a 2-1 home defeat to Japanese outfit Cerezo Osaka saw them eliminated.

Shandong, who have conceded just twice in seven league matches, will hope to pick themselves up with a home fixture against Henan Jianye.

The third-placed Beijing Guoan lost 2-1 to FC Seoul of Korea to also bow out of the Champions League, but should recover with a trip to rock-bottom Harbin Yiteng – yet to register a point this term - ahead on Sunday.

Guizhou Renhe coach Lei Gong will need to boost his side's morale after they were hammered 5-0 by Australia's Western Sydney Wanderers to prop up the rest of Group H.

They go to the second-bottom Changchun Yatai on Saturday.

Leading scorer Abderrazak Hamdallah will be hoping to continue his hot streak of form as Guangzhou R&F take on Dalian Aerbin.

The derby between Shanghai SIPG and Shanghai Shenhua on Saturday is sure to be hotly contested, while other fixtures see Shanghai Shenxin travel to Tianjin Teda and Jiangsu Sainty meet Hangzhou.