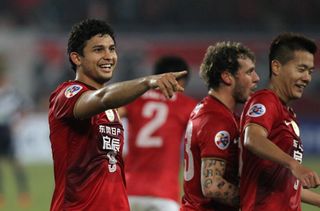 Evergrande and R&F - first and fourth respectively - have hit the back of the net 45 times between them across the first eight rounds of fixtures, meaning they have managed two more goals than the rest of the top six put together.

Elkeson has led the way with six goals for the current league leaders, while Dong Xuesheng and Gao Lin have both chipped in with four strikes apiece.

Marcello Lippi will be hoping his menacing attack can deliver the goods once again on Wednesday, when the reigning champions welcome Shanghai SIPG to Tianhe Stadium.

In contrast to Evergrande, SIPG have been relatively goal-shy this season. Their 5-1 demolition of Shanghai Shenxin aside, the league's fifth-placed side have only scored seven goals in seven fixtures.

While Evergrande's goals have been spread among the squad, all but five of R&F's 20 strikes have come courtesy of leading scorer Abderrazak Hamdallah and Davi.

However, despite their prowess in front of goal, Sven-Goran Eriksson's men currently sit four points adrift of their city rivals and face a trip to Shanghai Shenhua on Tuesday.

Second-placed Shandong Luneng will be looking to keep up the pressure on Evergrande with victory at Changchun Yatai, while Beijing Guoan - a point further back in third - host Jiangsu Sainty.

It continues to be a difficult season for Harbin Yiteng, who are still waiting to register their first point since arriving in the top flight.

With just three goals from their opening eight fixtures, Harbin may be finding it difficult to see where a point may come from.

However, they may fancy their chances at Henan Jianye, who have only scored five themselves and boast just one win.

Liaoning Whowin could pull away from trouble with a win at Shanghai Shenxin, and Dalian Aerbin will target a first win in five when they host Guizhou Renhe.

In the remaining midweek fixture, Tianjin Teda travel to Hangzhou.