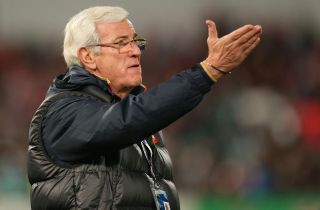 Lippi was forced to watch from the stands as his Evergrande side relinquished their Champions League title, despite beating Western Sydney Wanderers 2-1 on Wednesday.

The veteran Italian coach was serving a one-match touchline ban after angrily targeting officials on the pitch following the 1-0 defeat in Sydney in the first leg.

With the quarter-final tie finishing 2-2 on aggregate, the Australian side progressed on the away goals rule and Lippi must now pick his team up when Chinese Super League strugglers Liaoning Whowin visit the Tianhe Stadium.

Defending champions Evergrande will be more than confident of collecting three points having lost just once in just 11 league outings, while the reverse fixture finished 4-0 in their favour back in April.

However, Liaoning will look to capitalise on Evergrande's potential Champions League hangover and build on last Saturday's 2-1 win at Tianjin Teda - their first victory since May.

Second-placed Beijing Guoan failed to take full advantage of their game in hand over Evergrande last weekend as they could only draw 2-2 at Shandong Luneng.

They now face rock-bottom Harbin Yiteng, who have just four league wins to their name all season, but did secure a morale-boosting 3-1 triumph at home to Hangzhou last time out.

Shanghai SIPG aim to boost their Champions League hopes against city rivals Shanghai Shenhua, while Guizhou Renhe look to enhance their own continental hopes at home to Changchun Yatai.

Also on Sunday, Henan Jianye will be desperate for three points on home soil to ease their growing relegation fears against Shandong Luneng, while Hangzhou can put space between themselves and the bottom two if they beat Jiangsu Sainty at home.