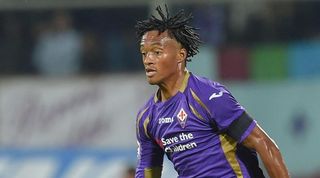 The Colombia international signed for Chelsea on a four-and-a-half-year deal on Monday, leaving the club he joined in 2012.

However, Montella insists there will be no dwelling on Cuadrado's exit, stressing the focus will be on building for the future.

"We can say that we have forgotten about Juan Cuadrado," he said following Tuesday's 2-0 Coppa Italia quarter-final win at Roma.

"Unfortunately he has gone, but before leaving we wished him good luck.

"We celebrated with him because he is going to play in a great environment, but we must look at the present and, above all, to the future with the players we've got, who give us ample opportunities."

Fiorentina will meet Juventus over two legs in the semi-finals.