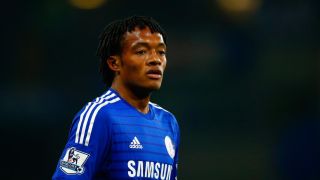 Since joining the Premier League champions from Fiorentina in February in a deal initially worth £23.3million, Cuadrado's limited game time has come mostly off the bench.

But Bacca believes the 26-year-old attacker just needs time to settle in England before showing his best form for Jose Mourinho's men.

"I know Cuadrado well as I see him in the national team," Bacca said on Wednesday.

"He's a great player and there's a reason Chelsea signed him which is one the best teams in the world.

"But we know that when you change leagues from Italy to England they are different leagues that have different ways of playing.

"I think that he signed for a team that has a very demanding manager and he also has to adapt to the league and the team with a squad that was already gelled.

"I think that he will very soon start to show what he's made of."